Review of the anatomy of the gastrointestinal (GI) tract:

The GI tract is comprised of a hollow tube through which food, fluid, and other bowel contents pass. The “tube” has multiple layers including a superficial layer called the mucosal layer and deeper muscular layers (see figure 1). The mucosal layer contains structures like glands or crypts that are responsible for secretion and absorption. The muscular layers are responsible for moving contents through the bowel (contraction and peristalsis). 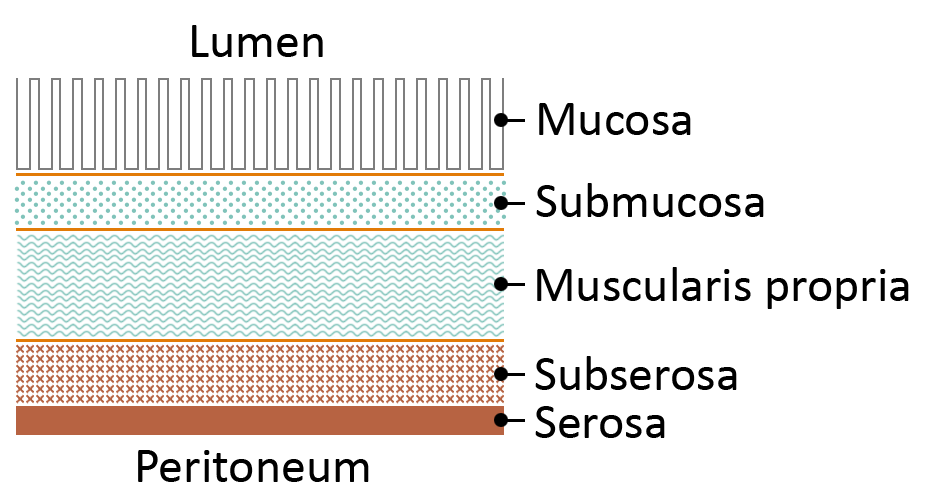 Two organs, the pancreas and liver, secrete products that help with digestion in the duodenum.

Inflammatory Bowel Disease: What is it and What Causes it?

Inflammatory Bowel Disease (IBD) is a group of chronic inflammatory diseases of the intestinal tract. The exact cause is not yet known. However, research done to date suggests that the disease develops as a result of an interaction between multiple factors including: 1) an individual’s genetic make-up (genes) and 2) environmental factors. Environmental factors can include the type and number of bacteria that live in the bowel, the content of the diet a person eats or whether or not an individual smokes (see Table 1 for environmental factors known to influence the development and severity of IBD). The two most common forms of IBD are Crohn’s disease (CD) and Ulcerative colitis (UC). Although these two types of IBD can be distinguished on the basis of signs, symptoms and diagnostic tests, many features can overlap making the diagnosis of CD versus UC challenging at times (see Table 2 for distinguishing features of CD and UC).

How Common is IBD?

The number of people affected by IBD varies from country to country and even between different groups within the same country. In Canada, it is estimated that 6 in every 1000 people has IBD, one of the highest rates in the world.

IBD is more common in people with a family history of IBD. The risk of IBD in an individual with an immediate family member with IBD is about 10% (1 out of every 10 people) compared to 0.6% (6 out of every 1000) in the general Canadian population. IBD is also more common in urban populations than rural populations as well as industrialized nations versus developing nations. It is unclear exactly why this is, but research suggests that it may be a result of living in an environment which is “too clean”, causing the body’s immune system to become intolerant of bacteria in the GI tract (also know as the hygiene hypothesis).

Current research studies also suggest that IBD may be more common amongst groups of people living in more northern regions, even within the same country. The reason for the increased rate of IBD in northern regions is not yet understood.

IBD is typically diagnosed during the second and third decades of life, but a diagnosis can be made at any age. UC is equally common in men and women; CD is slightly more common in women.

How Do I Know if I Have IBD? What are the Symptoms?

The signs and symptoms of UC depend on the severity of inflammation and where it occurs. UC commonly presents with crampy abdominal pain and diarrhea, which may contain blood, pus, or mucus. Some people may have a sense that they have not completely emptied their bowels or that they have to strain to do so. This is called tenesmus. Other signs include loss of appetite, weight loss, fever, nausea, and vomiting.

CD is a form of IBD that can affect both the upper and lower GI tract. CD most commonly affects the ileum, colon or both (see figure 1). The inflammation of CD extends through all layers of the GI tract (transmural inflammation) and therefore often results in the development of disease-related complications over time including bowel narrowing and scarring (stricturing) leading to bowel obstruction, ulceration through the bowel wall (perforation), and the development of tracts that connect the bowel to adjacent organs and structures (fistulae). Complications such as these usually require surgery in order to fix them.

What Are the Complications of IBD?

Toxic megacolon. Toxic megacolon refers to a significant dilatation of the large bowel. It causes severe pain and may lead to perforation (rupture of the bowel) and serious, life-threatening infection if not treated immediately.

Bowel perforation (hole in the bowel). Rupture of the bowel occurs when an intestinal ulcer erodes through the bowel wall and causes the intestinal contents, including bacteria, to leak into the abdominal cavity. This can lead to serious infection and requires immediate treatment usually involving antibiotics and surgery. If the perforation is small (microperforation), usually the body can seal it off and contain the spread of bacteria.

Osteoporosis. The disease itself (IBD) in combination with diets low in calcium and vitamin D and the use of certain drugs used to treat IBD significantly increases risk of developing osteoporosis, a condition characterized by weak, brittle bones. This increases a person’s risk of breaking a bone (bone fracture).

Colon cancer. Individuals with IBD have an increased risk of developing colon cancer. Things that increase an individual’s risk of developing IBD-related colon cancer are listed in Table 3. Regular screening is important to ensure detection of early signs of colon cancer. In the case of IBD early signs of colon cancer are abnormal cells that are detected under the microscope by doctors who examine intestinal biopsy samples. It is gener- ally suggested that patients with IBD for 8 years or more involving significant portions of the large bowel begin a colon cancer surveillance program. However, if you have a diagnosis of primary sclerosing cholangitis (PSC) you should start to have surveillance performed as soon as your IBD has been diagnosed. Surveillance involves having a colonoscopy with biopsies once every one to two years.

Malnutrition. Diarrhea, cramping and pain can make it difficult for some people with UC to eat a healthy diet.

Stricture. Over time, CD can cause scarring, leading to a narrowing of the bowel called a stricture. The symptoms of a stricture will depend on the severity, but in extreme cases, can cause obstruction of the bowel.

Fistula. CD can cause ulcers that penetrate through the wall of the bowel, creating an abnormal connection between different parts of the bowel, or between the bowel and the skin, bladder, or vagina. Fistulae can cause serious infection if left untreated, and may require surgery.

Malnutrition. Diarrhea, cramping and pain can make it difficult for some people with CD to eat a healthy diet. Furthermore, CD can decrease absorption of important nutrients from food, as well as medications used to treat CD (malabsorption). Malabsorption can lead to profound weight loss, the development of other conditions such as osteoporosis and anemia. Please refer to Table 4 for the symptoms and signs of malabsorption.

Bowel adhesions. Adhesions are bands of scar tissue that form between different parts of the bowel, often after surgery. Occasionally, adhesions cause obstruction of the bowel that must be corrected with surgery.

Can Other Parts of My Body be Affected if I have IBD?

Both UC and CD may present with signs and symptoms that occur outside of the GI tract (extraintestinal manifestations). These are caused by inflammation that occurs in other organs such as skin, eyes and joints. 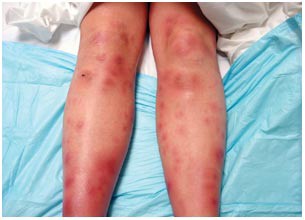 Can IBD Be Treated?

To induce and maintain remission of symptoms, drugs that reduce inflammation (5-ASA) orsuppress the body’s immune response may be used. Immunosuppressant drugs such as Azathioprine (Imuran®), 6-mercaptopurine and methotrexate work to decrease the body’s general immune response. Other types of immunosuppressants called tumor necrosis factor (TNF) inhibitors, such as infliximab (Remicade®) or adalimumab (Humira®) act more specifically on parts of the immune system believed to be part of the problem in IBD. Your doctor can help you decide which treatment is right for you.

Some of the immunosuppressant drugs may take several weeks or even months to have their full effect while others work quickly. Drugs that work quickly are used to induce remission. Medications such as steroids can have serious side effects if they are used long-term, so they are generally used for shorter periods of time or until another drug has a chance to take effect.

Sometimes, despite the best available medical treatment, surgery is necessary. If your IBD does not respond to medication, if complications such as fistulae or obstruction develop, or if the risk of medical therapy is felt to be greater than the risk of surgery, it may be necessary to remove the affected area of the bowel. Some individuals with UC undergo surgery to remove their colon (refer to module 3). Since UC affects only the colon, the GI symptoms of UC might be cured with this surgery. Unfortunately, since CD can affect any part of the GI tract, it usually cannot be cured with this type of surgery and almost always recurs after a surgery.

What is the prognosis?

IBD (both UC and CD) is a life-long and incurable disease. However, in most patients the symptoms can be effectively managed with the right combination of therapies. The majority of patients with IBD typically experience episodes of disease activity followed by periods of remission, which can vary in length from several weeks to years. It is often difficult to determine how someone with newly diagnosed IBD will do over time. However, some factors have been identified that are associated with more aggressive disease. Please see Table 5 for a list of such clinical predictors.

Handout designed by Jennifer Jones MD, MSc and Bev Wudel MD, University of Saskatchewan. Funding for this project provided by the Interprofessional Health Collaborative of Saskatchewan and the Saskatoon Health Region.

Where to find us